The Order has been in Tralee since 1243. The present Church has been in situ since 1866. Over the years many people have come to the Church to pray and to worship. The Church had its restoration period in the mid 1800's when the Dominican Fathers preached a Parish Mission in the Parish church of St John's in Castle Street. Money was vowed to the Order for it to help build a Church anew in Tralee and to this end, John Mulchinock, became the great benefactor of the Church. 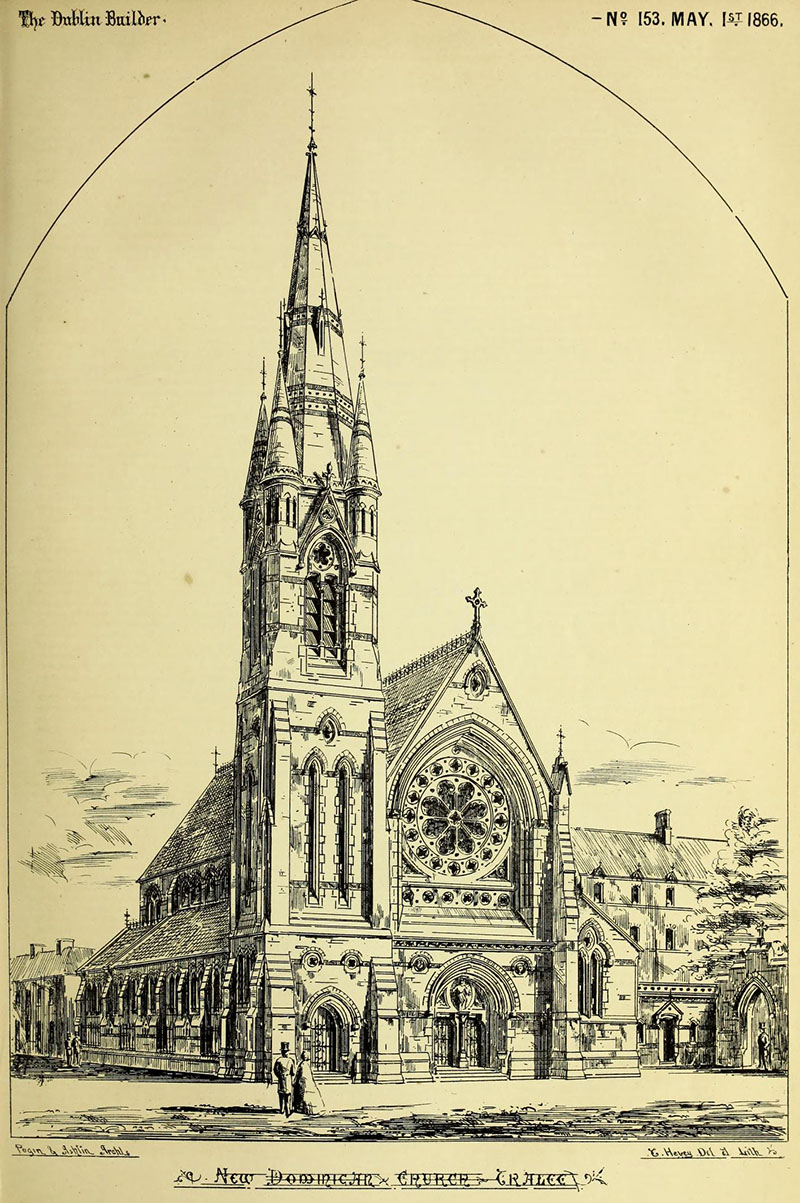 Unfortunately, he died before he could do much to help the founding of the present Holy Cross. In 1856 the newly appointed bishop, Dr David Moriarty, invited the Dominicans to set up a house. This was declined by the then Provincial of the Irish Province, - due to a problem that is extant today in the Irish Church - a shortage of priests to fill the house.

The First Prior of the newly formed Holy Cross Priory was a Fr Pius Lynch OP. The chapel was a small room in 1 Day Place. In 1862 Fr Lynch was succeeded by Fr Thomas Rush OP as Prior of the Convent. He took up his position with great dynamism and the preparation for the building of the Church were set in earnest. With the help of some friends, he obtained a bank loan of £2000 to purchase the present site on Day Place from Mr William Denny. He then engaged Mr George Ashlin RHA to prepare the plans for the Church.

Meanwhile, collections for the building fund were organised throughout towns and diocese. The Catholic Merchants of Tralee were particularly generous to the project. Mr Patrick Jeffers, a Kerryman based in Dublin, contributed the princely sum of £500. Fr Rush undertook a parish to parish collection in the diocese and in Tralee, a penny-a-week collection was organised by Mr Robert O'Kelly

By the end of 1865, the building fund proceeds amounted to £2100. Ashlin's plans for the New Holy Cross were published in The Dublin Builder. The design is described as having novelty and boldness. The writer continues It is built on the site adjoining the Dominican Convent, with which it will communicate. At the north-west angle, there will be a tower and spire to the height of about 120 feet, and the west front will be enriched by an elaborate Rose Window of excellent detail. The total height is 126 feet, and width, including aisles, 51 feet; the height from the floor to the ridge of the nave is 56 feet 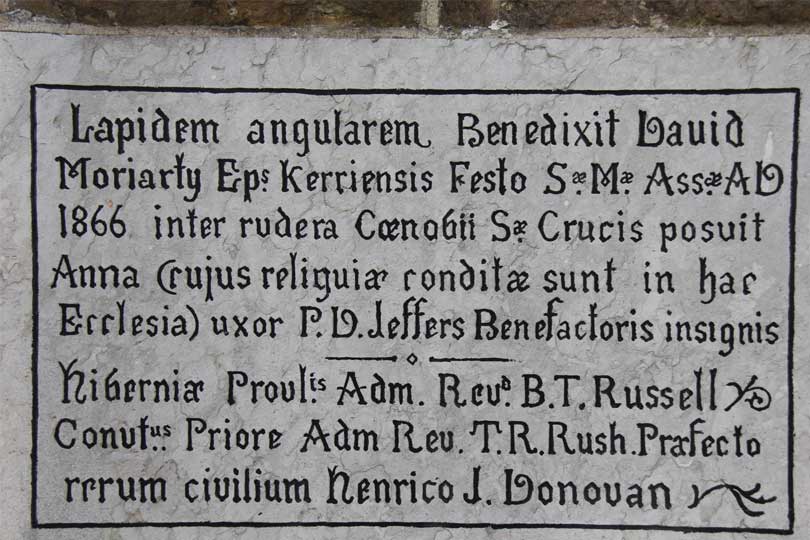 The builder is named Mr Arthur Crosbie and the cost at about £6000. The cornerstone of the building was laid on 15th August 1866, the Feast of the Assumption, by Mrs Anne Jeffers, wife of the Benefactor.

From the beginning, serious difficulties were encountered with the foundation. The Tralee Chronicle of the period recalls that 'the trenches and foundations would become submerged by the incoming tide, carrying everything before it and undoing, in a few moments, the work of weeks.' The contractor eventually overcame the elements by workiing night and day, and using inverted arches and a new material called concrete. No chances were taken with the tower. The foundation of it were taken down fifteen feet to solid rock. However, lack of funds would eventually prevent its completion.
The Church was solemnly blessed and opened by Most Rev. Dr. David Moriarty, Bishop of Kerry, at a tumultuous ceremony on the Feast of the Exaltation of the Cross, 14 September 1871