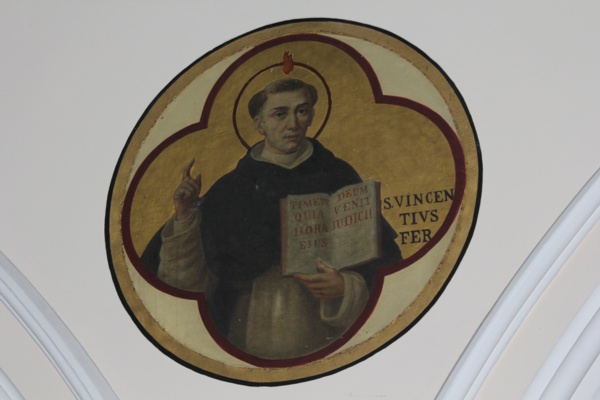 Vincent's career of miracle working began early; prodigies attended his birth and baptism at Valencia, and, at the age of five, he cured a neighbours child of a serious illness. These gifts, and his natural beauty of person and character, made him the centre of attention very early in life. Clearly, Vincent was marked for an unusual life. He began his classical studies at the age of eight, his theological study at 14. Four years later, as all had expected, he entered the Dominican Order in his native city. So angelic was his appearance, and so holy his actions, that no other course seemed possible to him then to dedicated his life to God.

Having made a particular study of Scripture and Hebrew, Vincent was well equipped to preach to the Jews. They were quite numerous in Spain at the time. During the years of his preaching, more than 30,000 Jews and Moors were converted to Christianity. His numerous miracles, the strength and beauty of his voice, the purity and clarity of his doctrine, combined to make his preaching effective, Based as it was on a firm foundation of prayer. Vincent worked so intensely that he fell mortally ill and only a miraculous visit from Sts Francis and Dominic cured him. On this occasion, he was bidden to rise and preach whenever and wherever he was needed. The preaching of Vincent became a strange but marvellously effective process. He attracted to himself hundreds of people - at one time more than 10,000 - who followed him from place to place in the garb of pilgrims.

The priest of the company sang Mass daily, chanted the office, and dispensed the sacraments to those converted by Vincent's preaching. He preached to Saint Colette and her nuns, indeed it was she who told him that he would die in France. Too ill to return to Spain, he did, indeed, die in Brittany. The Bretton fishermen still invoke his aid in storms. In Spain he is also the patron of orphanages.