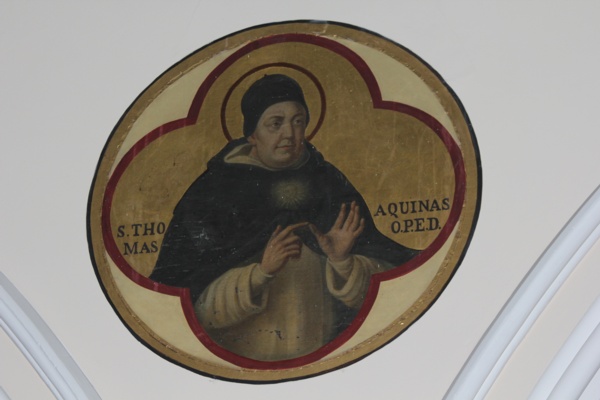 Thomas the apostle challenged the story that the Lord was risen, and his unbelief brought forth a glowing testimony of the reality of the Resurrection. Twelve centuries later, his name sake, Thomas Aquinas, questioned - without doubting - the great truth of faith, and demonstrated for all time the relationship of faith and reason.

As the first Thomas found by experiment (“Except I shall see in His hands the prints of the nails, and put my finger into the place of the nails, and put my hand into His side”) the man who stood in the midst of them was non-other than Jesus Christ, so Thomas, the angelic doctor, proved for all time but there is no quarrel between reason and revelation. Thomas, son of the count of Aquino, was first trained at the Benedictine Abbey of Montecassino, and here, even in childhood his great mind was wrestling with theological problems. His passion for truth is expressed in his constant question:“Master, tell me what is God?” Better to train the boy’s mind his father sent him at in early age to do university of Naples.

Here he studied under Peter of Ireland and, undisturbed by the noise and wickedness of the great university city, proceeded rapidly on his quest for God. Meeting the Dominicans, he was strongly attracted by their apostolic life and petitioned to be received as one of them. While recognising the gifts of the young student, the Friars refuse to admittance to the Order until he was 18. Acting deliberately, without a backward glance at the power and wealth he was leaving, Thomas, at 18 joyfully put on the habit of the new Order. Given the finest education that his time could offer, Thomas studied first at Cologne, later at Paris, under Master Albert the Great. This outstanding Dominican teacher and Saint became his life-long friend and loyal defender.

They taught together at Cologne and became a mutual influence for good in one of the most beautiful friendships in Dominican history. For the rest of his life, Thomas was to teach and preach with scarcely a day of rest. He travelled continually, which makes all the more remarkable the amount of writing he did. Death found him in a familiar place - on the road - where he was bound for the council of Lyon in obedience to the Pope’s command. He died at the Cistercian abbey of Fossanova, in a borrowed bed - obscurity hardly fitting the intellectual light of the Order, but perfectly suited to the humble friar that Thomas had always been. Overheard in a colloquy with the Master he served so well with heart and mind and pen Thomas was heard to ask as his reward “Thyself, O Lord, none but Thyself!”