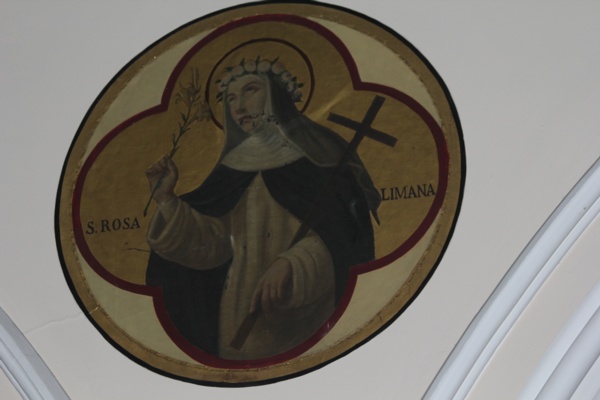 The first canonised saint of the New World lived in a time quite different from our own. As a matter of fact her whole life sounds very strange to us of other days and other customs. But, if we will take the trouble to study her life, we will discover that the little Saint of Lima, who died 400 years ago, could teach us a great deal. It is well to remember that the penance’s Rose inflicted upon herself - which are the only things most people know about her - afflicted only herself. They were no burden to those around her. Rose lived all her life with her own family, not in a desert, far from people. It is probably her greatest genius that she worked out a program of penences almost unparalleled in history. Rose was born in Lena in 1585, the eleventh child of Spanish-Indian parents. Because she was very delicate, she was baptised at birth and given the name Isabel. When she was taken to the church for the solemn ceremony of baptism, the Archbishop, St Turribius, inadvertently called her Rose. The name remained.

From her earliest days the baby seemed to be marked with the favours of God. When she was barely able to walk, she would be found lost in contemplation before the big crucifix in her mother’s room. That she understood suffering became clear when, in a childish accident at the age of three, she endured the pain of surgery without a whimper and commented that Jesus had suffered much more. At another time she was ill with a bad ear ache. Asked if it hurt very much yes a little but our Lord’s crown of thorns must’ve hurt much more. When Rose was twelve years old, the question of her marriage was broached. Her mother was a matchmaker, like many others, and she envisioned her beautiful daughter as Lima’s loveliest bride. Rose hated to hurt her mother, and she actually did not know how to explain that she wished to consecrate herself to God. She had, in fact, already done so many years ago and she had no intention of marrying. When her mother finally accepted this, she conceived what she thought was the only sensible answer: Rose should enter a convent. Neither she nor anyone else could sympathise with the girls intention of becoming a Dominican Tertiary, living at home. A long and difficult period ensued. Finally, however, the girls plan became a reality and Rose, followed by a weeping mother, went to the Dominican church to receive the habit of Saint Dominic and the Tertiary rule of life. We do not know as much as we would like of the visions and celestial favours overalls. Obviously she was in a state of ecstasy a great deal of the time. Sometimes when she went down to the church to receive Holy Communion, she was rapt in ecstasy, and for hours she would be unconscious of the people who crowded round to watch her.

She was also exposed to the most terrifying Temptations - to visitations of the devil who came in visible form, and for long periods of spiritual desolation. Once, at the end of a particularly gruelling encounter with the devil, she reproached Our Lord: “Lord, if you had been here I would not have had to expose to such horrible temptations”. To which Our Lord replied: “Rose, if I had not been there, do you think you would have conquered?” Rose prayed for martyrdom, longed for the life of a missionary. Both of these things seen the remote in Catholic Lima . At one time, the chance of martyrdom seemed almost within her grasp. A fleet of Dutch pirates anchored off Callao, and Lima was in a paralysis of fear. Rose hurried to the church, planning to give up her Life in defense of the Blessed Sacrament. However, the fleet sailed away without harming them, and the people of Lima credited her prayers for their deliverance. Rose died at the early age of 31, on August 24, 1617. The entire city mourned the death of the saint, for it seemed that the people of all classes owed her a special debt. One and all held the same opinion; Rose was a saint. The church confirmed this opinion in 1671, making her the first canonised saint of the Americas.