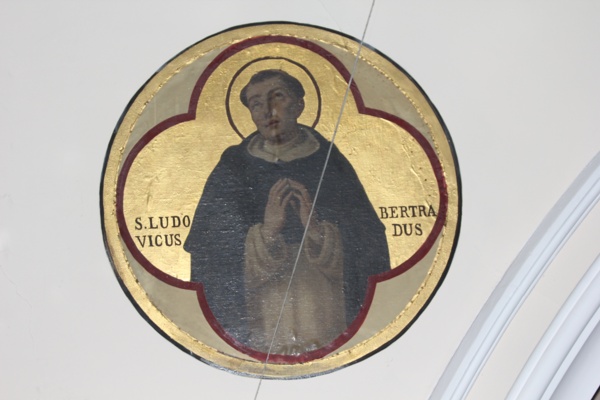 Louis Bertrand was baptised at the same font where his famous relative, Saint Vincent Ferrer, had been baptised some two centuries before, and he grew up with but one thought in his mind, to imitate his saintly relative and become a Friar Preacher. The father of Louis had at one time planned to become a Carthusian, and he was, as head of the family, undoubtedly an excellent Christian. But he bitterly opposed his eldest sons desire to renounce his inheritance and become a friar.

He succeeded in keeping Louis from taking the step until his son was eighteen. Louis run away when he was fifteen, planning to become a missionary, but he was recognised by a friend of the family and brought home. He busied himself with practices of the devotion far beyond his years and strength, and he attached himself to the Dominican fathers, who allowed him to serve Mass and work in the garden until he should be old enough to join them. At last, when he was eighteen, he joyfully fled his father’s house and donned the white habit he had so long desired. He was received into the convent of his native Valencia. After several years as master of novices, where he proved himself prudent, kind, and firm, Louis volunteered for the foreign missions and was assigned to the territory of New Granada. In 1562, he left Valencia on foot, carrying staff and bravery and attended by two brothers.

They set sail for the new world and arrived in the mission field. It was very unpromising. The people were devil-worshippers. They lived in country almost impossible of access, and they spoke a medley of languages that seemed impossible for Europeans to understand. Louis prayed for the gift of tongues, and he received this favour. The Indians understood him and were converted. Returning to Spain after many years on the missions Louis was once again appointed master of novices, and he inspired the young men with love of God and missionary zeal. He fell ill, and, though valiant attempts where are made to save such a valuable member of the Order, he died on the day he prophesied that he would die. In heaven he became the protector of the missions he had worked so hard to establish.