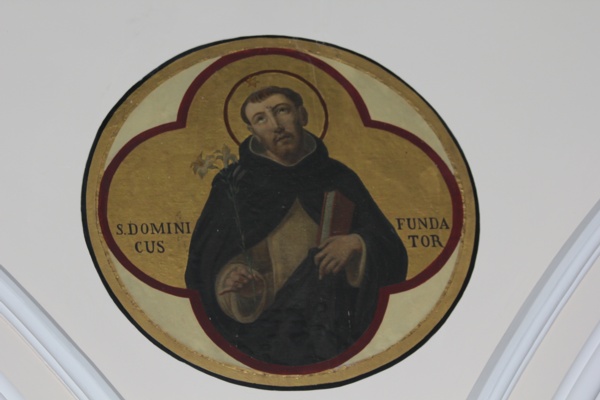 A master of paradox was this thirteenth century friar who established the foundations of democracy in the depressing days of feudalism, and laid out with a globe-circling sweep the plans that would convert a world no one had yet dreamed about. It is doubtful if any other man, Saint or not, accomplished so much in so short a lifetime, or expressed so unequivocally his faith in the future. Dominic de Guzman was born in Old Castile around 1170.

His father was a castillan for a fort on the border of Christian Spain, and the two elder sons were studying for the priesthood when Dominic was born. In the ordinary course of events the boy I would have been trained to arms but his mother’s pleading and his evident talent for study determined that he too would be given to the church. Taking his studies at the University of Palencia he was ordained and soon afterwards join the chapter of Augustinian canons Osma. His whole life is mirrored in this picture of a devout and quiet young priest happy in the cloisters solitude with it’s double obligation of choral office and teaching the truths of God. Dominic travelled to France with his bishop and soon came across the Albigensian heresy.

Dominic decided that these people needed to have the word of God preached to them in all truth and sincerity. In 1216 Dominic formed a group of men together to bring the preaching of the good news of God to this people of southern France. By this time Dominic was at the centre of a great deal of action as well as prayer. A group of nine women heretics he had converted where established at Pruille in a convent; here they could assist with prayer and good works in the preaching activities of the brethren. Sixteen men, of many nationalities, had thrown in there lot with him and were willing to share with him in the business of world conquest. And unnumbered band of interested seculars, most of whom were knights and wealthy men and their womenfolk hovered like bees around the work of Dominic. He organise them into chapters of active religious helpers even before the Order obtained papal approval. Dominic set up the Dominican Order to preach the Word of God at a time when only bishops were allowed to preach. Dominic organised men and women to be the mouthpiece of God. Dominic died in Bologna on August 6 1221 on his return from the Second General Chapter of the Order. He had lived long enough to see his Order established firmly enough that no persecution or trouble would shake it. Dying, he promised his weeping brethren that he would be of more use to them in heaven then he was on Earth – a promise which he has kept abundantly in the centuries since.

The burial of Saint Dominic took place according to his wishes - in extreme simplicity. He was buried in a modest grave "under the feet of his brethren." Here he remained until the urging of Pope Gregory IX, who is a personal friend of his, gave rise to the first translation of the relics. The feast of the Saint had to be transferred from the sixth of August, which was the day of his death, because this was the Feast of the Transfiguration. August fourth was the feast day appointed by the Pope.