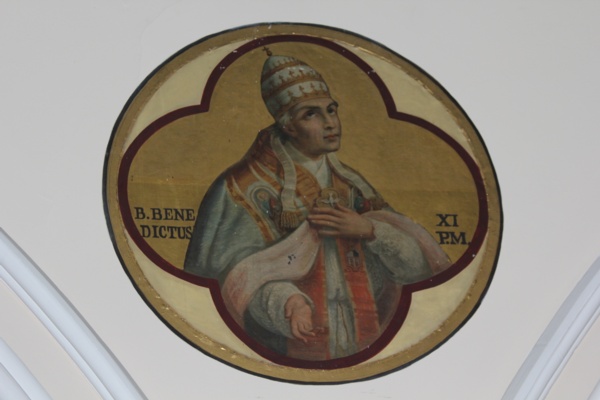 Nicholas Boccasini was born in Treviso, in 1240, of poor parents. We know little about his family, though there were several different traditions concerning it. One claims that his father was a poor Shepherd, another that he was an impoverished Noble. Whichever he was, he died when Nicholas was very small, and the little boy was put in the care of an uncle, a priest in Treviso. The child proved to be very intelligent, so his uncle had him trained in Latin and other clerical subjects. When Nicholas was ten years old, his uncle got him a position as a tutor to some noble children. He followed this work until he was old enough to enter the Dominican community at Venice, which she did in 1254. Nicholas was pre-eminently a teacher.

He did his work well. We know this from several sources, including a testimonial from no less then Saint Antoninus, who said of him that he had “a vast store of knowledge, a prodigious memory, a penetrating genius, and that everything about him endeared him to all”. In 1295, he received the degree of Master of theology. The administrative career of Nicholas Boccasini began with his election as Master General of the Order in 1296. His work in this office came to the notice of the Pope, who, after Nicholas had completed a delicate piece of diplomacy in Flanders, appointed him Cardinal. The Dominicans hurried to Rome to protest that he should not be given the dignity of a cardinal, only to receive from the Pope the mystifying prophecy that God had reserved an even heavier burden for Nicholas. Boniface VIII did not always agree with the man he had appointed Cardinal-Bishop of Ostia and dean of the Sacred College.

But they respected each other, and in the tragic affair that was shaping up with Philip the Fair of france, Cardinal Boccasini was to defend the Holy Father, even to the point of offering his life. At the conclave, following the death of Boniface VIII, the prophesied burden fell on the shoulders of the Cardinal-Bishop of Ostia, who took the name Benedict XI. The reign of Benedict XI was too short to give him time to work out any of his excellent plans for settling the troubles of the church. Most of his troubled reign was taken up with undoing the damage done by Philip the Fair. He lifted the interdicted on the French people that have been laid down by his predecessor. His reign, short though it was, was noted for its leniency and kindness. Benedict XI died suddenly in 1304. Some people believe that he had been poisoned, but there has never been any evidence that this was the case. Many miracles were performed that his tomb, and there were several curers even before his burial. Pope Clement XII declared him blessed in 1736.