Saint John of cologne a.k.a St John of Gorkum 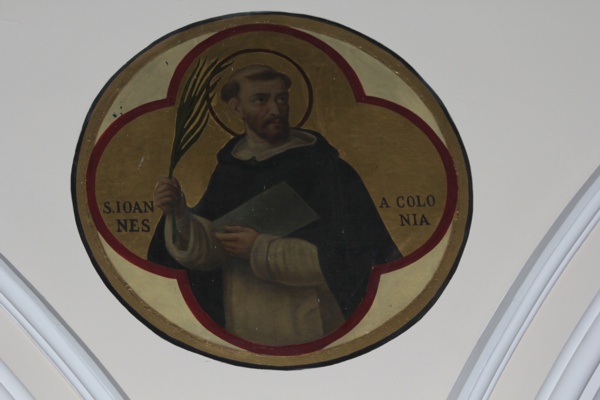 Previous to his martyrdom, all that we know of the life of Saint John of Gorkum can be quickly told. He was a religious of his convent of cologne who performed the duties of a parish priest in Holland, which was at that time engaged in a death struggle with the Spanish princes. The place and date of his birth are not known; those of his death will never be forgotten. Anti-Spanish and protestants soldiers banded themselves into lawless armies of pirates and, unpaid and disillusioned, foraging for themselves in the sea ports, looking for plunder. Reproved by the clergy, they turned on the church and one band of pirates laid siege to the city of Gorkam, capturing it after a struggle.

For reprisal - because of the cities determine defences - they gathered all members of the clergy into one miserable prison and set about taking revenge on the priest for their own grievances against the Spanish crown. Hearing of the plight of these poor priests, John left the comparative safety of his parish and entered Gorkam, in disguise, in order to give whatever assistance he might. Several times he entered the city to dispense the sacraments, and to bring consolation to the priests who were being cruelly tortured. Eventually, he was taken prisoner and subjected to torture. Angered by the endurance of the priests, the Pirates increased their abuses. Some of the religious were very old and infirm, but one and all, even to an aged Augustinian who was so weak he could barely stand, they bore their martyrdom with patience and sweetness for ten terrible days and nights. They were repeatedly asked to deny the Real Presence, and just as repeatedly refused, which brought on more and more dreadful tortures. Finally they were thrown into the hold of a ship, and they were taken to another city to be killed in the presence of a Protestant noble man, a man noted for his hatred of Catholicism. Eleven Franciscans, a Premonstratensian, an Augustinian and four Secular priests suffered with John of Cologne the long anguish of protracted martyrdom. The nineteen gloriously went to heaven.

The martyrs, after being exhibited to the curious townspeople (who paid to see the spectacle), and subjected to every manner of torture, were finally hung in an old barn, amid the jeers of the mob. Stripped of their habits and made, like your master, “the reproach of men and the outcast of the people”, they benefited by their Christ-like suffering and detachment and died a Christ-like death. The scene of their martyrdom soon became a place of pilgrimage, where all the Christian world did reverence to the men who are so courageously obedient on to death.