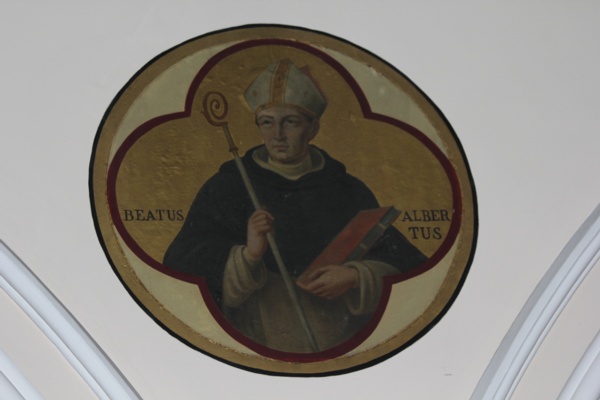 Today in Cologne the spires of a building begun seven centuries ago still point to heaven. It is only a legend the credits the design of this cathedral to Saint Albert the Great. But it is so typical of his own life pointing all beauty to heaven that it is a legend very easy to believe. Albert was born in Swabia in Germany around 1207. His keen observation, which was later to show itself in scientific works, had its initial training in the woods near his father’s Castle where he and his brother Henry - who also became a Dominican - hunted with hawks and hounds and became experts in falconry.

Sent for further studies to the University of Padua, which was Queen of the natural sciences, as Paris was to theology and Bologna of law, Albert delved happily into new fields of science. He found many new things at Padua but his greatest find was a fellow German - Jordan of Saxony - who captured his heart for the new Order of Friars Preachers. He was received into the Order probably in 1223. Albert had an enquiring mind. He was in experimenter and a classifier at a time when all experimental knowledge was under suspicion.

There was not a field in which he did not at least try his hand, and his keenness of mind and precision of detail make his remarks valuable, even though, because he lacked facts which we now have his conclusions were incomplete. He wrote on botany, astronomy, chemistry, physics, biology, geography and meteorology. He made maps and charts and experimented with plants; he studied chemical reactions; designed instruments to help with navigation; and he made detailed studies of birds and animals. He taught at Cologne and Paris, where he had the happiness of seeing a quiet student from the kingdom of Sicily rise like a brilliant star that would outshine all others.

What must it have been like to watch the mind of Thomas Aquinas develop and unfold to the wisdom of time and eternity, and to help him open doors to profound truths? Albert was Bishop of a rat is born for two years, but resigned in order to return to the classroom. He outlived his beloveds pupil by several years, and, in extreme old age, he walked halfway across Europe to defend the pieces of Thomas’ that was challenged.