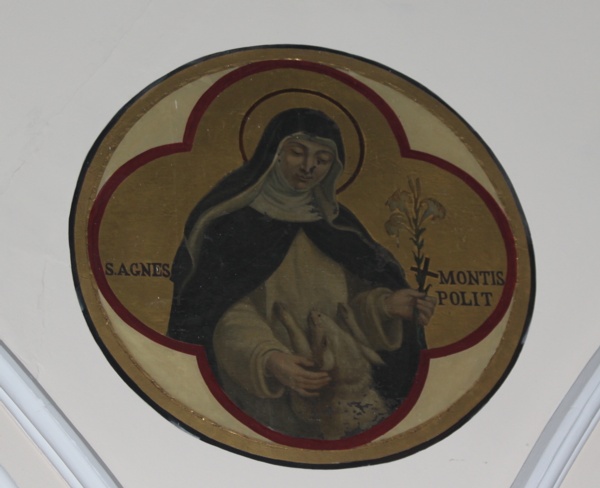 Although Saint Agnes was not in any way a “child saint” like her little Roman patroness, there is about her something of the same simplicity, which makes her name appropriate. Some of the best known legends about her concerns her childhood. Agnes was born in 1268 in a little village near Montepulciano of a wealthy family of De Segni. Her birth was announced by great lights surrounding the house where she was born, and from her babyhood, she was one specially marked out for dedication to God.

When she was nine years old Agnes insisted that the time had come to let her enter the convent. She was allowed to go to a group of Franciscans whose dress was the ultimate in Franciscanism. She reached a high degree of contemplative prayer and was favoured with many versions. One of the loveliest is the one for which her legend is best known: the occasion of a visit from the Blessed Virgin. Our Lady came with the Holy Infant in her arms, and allowed Agnes to hold him and caress Him. Unwilling to let him go Agnes hung on when Our Lady reach to take Him back from her. When she awakened from the ecstasy, Our Lady and her Holy Child were gone, but Agnes was still clutching tightly the little gold cross he had worn on a chain about his neck. She kept it as a precious treasure. Another time, Our Lady gave her three small stones and told her that she would use them to build a convent one day. Agnes was not at that moment even thinking about going elsewhere, and said so, but our lady told her to keep the stones - three in honour of the Blessed Trinity - and one day she would need them. A revelation had told her that she was to leave the Franciscans, with whom she had been very happy, and that she, and the sisters of the house she would found, should become Dominicans.

In 1306, Agnes returned to Montepulciano to put the Lord’s request into action. All she had for the building of the convent and were the three little stones given to her by the Blessed Virgin and Agnes who had been a bursar and knew something about money, realised that she was going to have to rely heavily on the support of heaven in her building project. After a long quarrel with the inhabitants of the hilltop where she wanted her foundation, the land was finally secured, and the Servite Prior laid the first stone, leaving her to worry about where the rest of the stones were coming from. Agnes laid a hand to the project and guided it safely to completion. The church and convent of Santa Maria Novella where ready for dedication in record time, and the growing collection of aspirants pleaded with her to admit them to the new convent. Agnes died on the 20th of April 1317. She died in the night and the children of the city weekend and cried out “Holy Sister Agnes is dead”. She is buried in Montepulciano and the tomb soon became a place of pilgrimage.