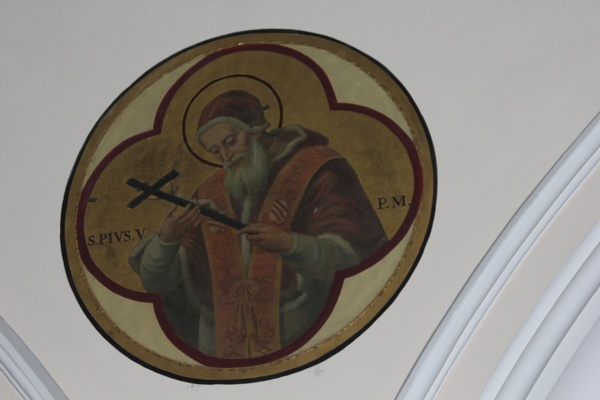 People who do not know anything else about Pius the fifth are quite apt to remember him as the Pope of the rosary, recalling his remarkable connection with the battle of Lepanto. Pius was born in 1504 in a tiny village of Bosco. His parents were poor and could not educate their alert little boy, who seemed far too talented to spend his life herding sheep.

One day, as he was minding his father's small flock, two Dominicans came along the road And fell into conversation with him. Recognising immediately that he was both virtuous and intelligent, they optained permission from his parents to take the child with them and educate him. He left home at the age of 12 and did not return until his ordination many years later. Pius was made Bishop, then cardinal, and he continued insofar as possible to observe the Dominican rule. In 1566 when the papal chair was vacant, the Cardinals, chiefly through the influence of Saint Charles Borromeo elected Cardinal Ghislieri. With great grief, he excepted the office and chose the name Pius V.

He began his reign by distributing to the Poor of the city the money that he should by tradition have spent for a banquet. When someone criticises this, he observed that God will judge us more on our charity to the poor dan on our good manners to the rich. Such an attitude was bound to make enemies in high places, but it in dared him to the poor, and it gave right thinking men hope that there was a man of integrity, and one who could help to reform the clergy and make a firm stand against the Lutheran heresy.